NISHIJIN KIMONO FROM 1200 YEARS AGO

-Textile manufacturing of the Imperial court- 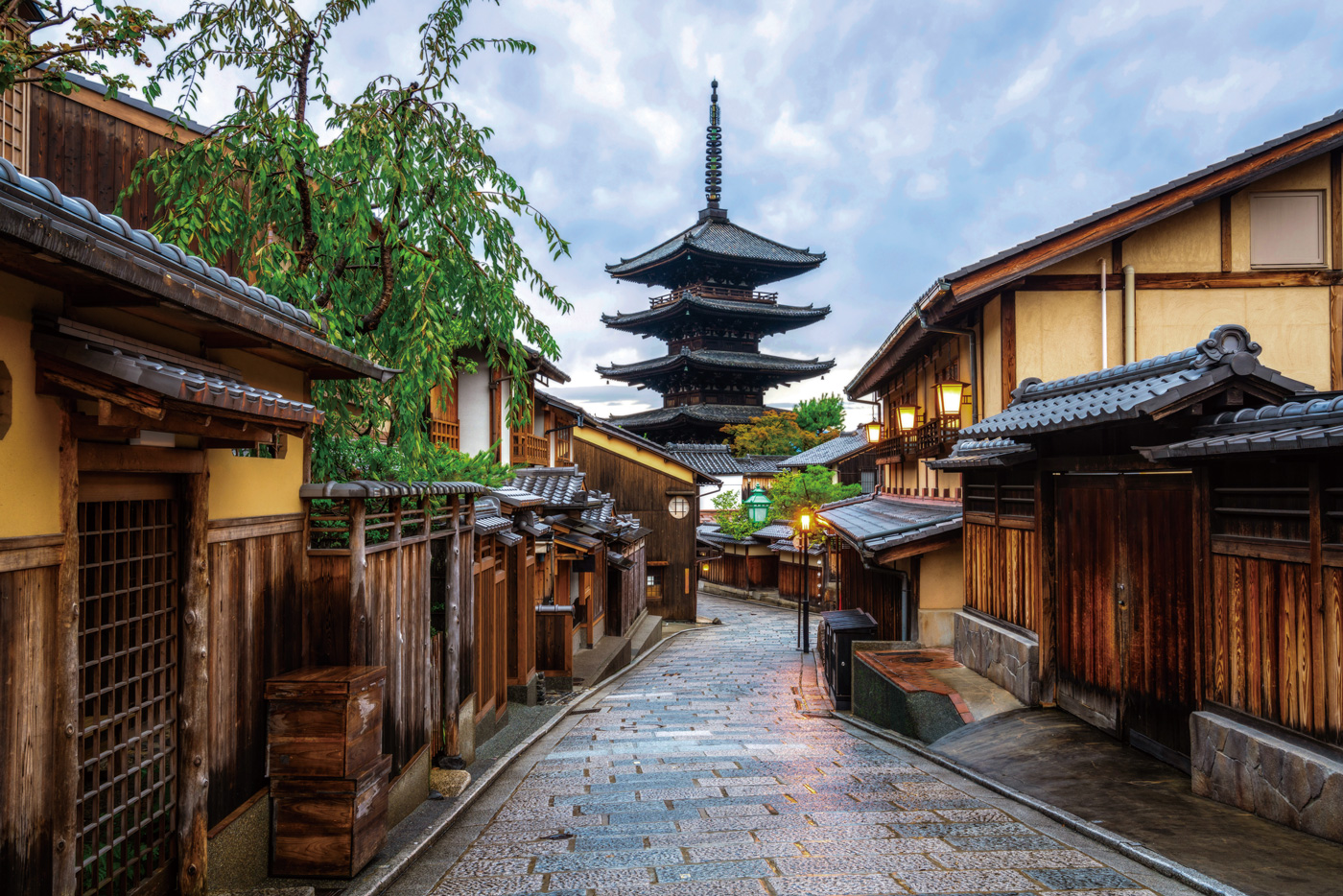 Nishijin woven silk can trace its origins back to 5th and 6th century Kyoto, a city prospering with a luxury textile-making. It’s industry protected by the imperial families, and the craftsman dedicated their products to them. The name called after a stunning historical war, which divided Japan into two regions. During the Onin War textile workers scattered, but after the end of the war in 1477, they returned to the Kyoto area and resumed textile production. The name of “Nishi(west)-jin(territory)” was derived from the territory of the western military troop. Today, Nishijin woven silk is recognized as a traditional Japanese manufacture by the government.Without manual works, traditional craftsman cannot complete their works, regardless of having their machineries. Nishijin woven silk needs 20 specialized processes and the machine has only a part of the process. The cooperation among the craftsmen supports the techniques of the tradition.
The silk has received many accolades a Nishijin Textil has been designated a traditional craftworks by the Ministry of Economy, Trade and Industry Designated traditional craft goods.

At Kyoto’s Nishijin, where the high-end silks are produced, they weave their original weft yarn in multiple ways to create well-detailed material. While the texture is soft, the tie has high durability, natural elasticity, and a finishing look that gives you an elegant and classy vibe.

​Manufactured in the oldest, largest and longest established factory in the Nishijin Kyoto Textile Union. The factory will only use the superior 3A Super Extra Grade silk thread.The weft uses an extremely thin thread (63 Denier), which is 1.7 times thinner than what others use having the advantage of realizing intricate designs, and bringing a glossy look to the fabric.

The density of the warp thread is 10,500/1m (using 21 Denier thread). Other brands have 8000～9000/1m on average, thus making a big gap in quality and density, and performs excellent in terms of durability.
The speed of the weaving loom that weaves the fabric is slower by 50 to 70% compared to other machines. By weaving slowly we can accomplish great hand feel and a beautiful glossy appearance unparallelled to rivals.
We use a Jacquard loom called Rapier. By using the clean underground water of Kyoto to dye the yarn,
the colors spring to life beautifully, producing and elegantly refined textured appearance.

Craftsmanship – We listen, they hear, and we make it happen

What makes Nishijin Textil stand out is its scrupulous weaving technology, and the craftsmen’s attention to even the smallest details. Process of picking the color and pattern coordination for the woven area is the same as that of a kimono’s; they are carefully sought out.
Each hand-stitched ties have a vibrant appearance with a sense of sophistication added in the finishing look. 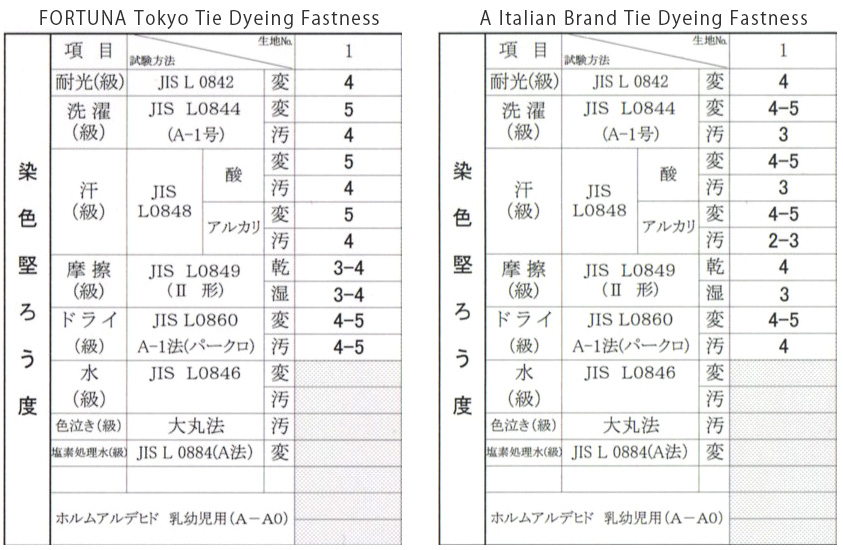 Below is a chart comparing the degree of color fastness of our silk neckties to a one from an Italian brand. With 5 being the highest rank and 1 being the lowest, FORTUNA Tokyo’s 4.2 is decent grade considering it went above the average in the Japanese industry, which is 4 out of 5. In Japan, many factors are weighed in when determining the degree of color fastness. For example, contact with the shirt or skin, or the absorbent of sweat is put are crucial points when grading.
On the other hand, the Italian brand’s average score was 3.7, below the average of Japanese quality neckties. Generally accepted degree differs from country to country. Opposed to Japan’s high bar, in most European countries grade 3 would make a satisfying number, thus the Italia brand’s average grade is considered good in European countries.

While it is true the lower the grade, the wider the variation of color is, it also has its downside. Products given a smaller number for the degree of color fastness are more likely to have colors fade off in a fast rate.

Our woven silk necktieｓ retains its shape, and is wrinkle-resistant. Additionally, our silk does not attract dirt, making the product durable.

The lower sections of our neckties resemble the end of a sharp Katana. Every product is cut on the bias, which means they are cut at a 45 degrees angle for a straight hang, nicer shape, and natural elasticity.

On the back of the necktie we have a bar tack, which is a heavy horizontal stitch, in order to reinforce closure and maintain its original form. That is why there’s no need to worry about the tie starting to bubble up.

The transformation from Design to Nishijin Kyoto silk

Once the design has been confirmed it is then turned into a CG drawing. According to the CG drawing a Jacquard punched card will be made so that it can be read in the loom.

After a jacquard punched card is ready, samples will be made. To do this different colored silk threads will be hand picked depending on the shade that is required, and there are a lot of shades to choose from.

Though the threads are dry, they need to be spun on to a different thread frame to make the weaving process easier.
Once the thread frames are ready, next comes the actual weaving. In the ancient times, it used to be done by hand. But in recent years they have started using a Jacquard weaving loom called ‘Rapier’.When it comes down to the quality of Nishijin Kyoto silk, it has its own unique characteristics.
The weft thread is actually 1.7 times thinner than others, which helps in bringing intricate designs to life. These designs are complicated, detailed, and very accurate.

Most other brands have around 8,000 to 9,000 warp threads per meter, but Nishijijn Kyoto silk have around 10,500 warp threads per meter making it denser and stronger than others.
Thinner threads also lead to slower weaving speeds making it around 50 – 70% slower that other factories, but that makes up for pristine quality and perfection.
Once the weaving process is complete, the sample swatches will then be arranged.As soon as the samples have been completed, swatches are sent to be approved. As soon as the the swatches are approved, mass production weaving will take place.
When mass production has been completed the finished textiles will be sent to the factories to be manufactured into neckties.
This entire process spans from 1.5 to 3 months depending on the quantity required.